The DC-STIMULATOR is a stimulator for cranial electrotherapy that provides a stimulation using weak direct current (transcranial Direct Current Stimulation tDCS) within non-invasive interventional neurophysiology. The electrical charge and current density applied are far below the threshold for releasing a stimulus and have a modular effect on existing neuronal elements.

Depending on the duration, used current, current density and frequency, the stimulation is effective on inhibiting or activating cortical activity.

The DC-STIMULATOR is used for transcranial Direct Current Stimulation for symptom relief in depression. 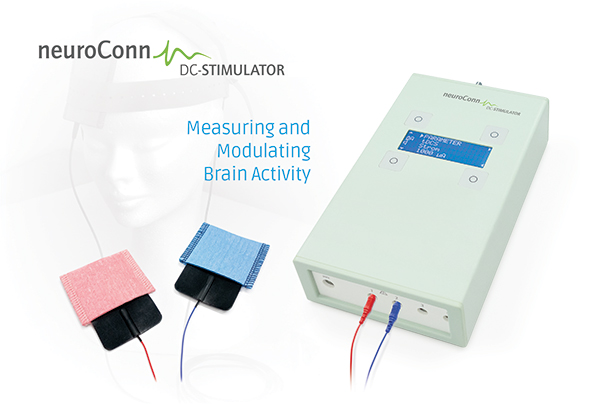 These currents influence neurotransmitter channels by changing the electrical charge in nerve cell membranes. In turn this changes the excitability of brain cells.

Studies have shown that tDCS can be used as a therapy method for various brain disorders that would otherwise be treated with therapeutic drugs, often associated with harmful side effects.

The NeuroConn DC stimulator and NeuroConn DC Plus offer 1 channel (anodal and cathodal) trans-cranial stimulation, adjustable application time of up to 30min with adjustable current up to 4.5mA is also included. The neuroConn trans-Direct Current Stimulator (tDCS) is a microprocessor-controlled constant current stimulator. It offers several safe and reliable stimulation modes that can be programmed.

In addition the neuroConn system offers extra software options including an advanced sham feature allowing double blind trials and a SIMPLE mode that restricts the use of the stimulator allowing the user to only choose from 4 predefined settings. 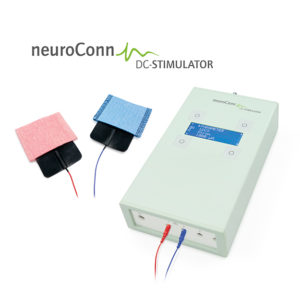